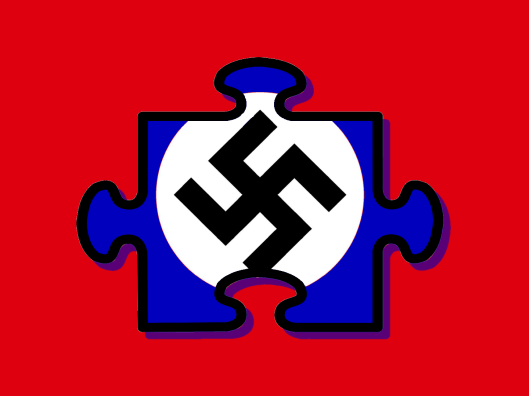 this is autism speaks – a hate group aimed at eradicating autistic people. this why you should not support them – ever. among other things – they promote murder/suicide of autistic people as their ‘final solution’.

the video you just watched is a parody of a commercial for autism speaks which i will not post here – you can google on you tube for it if you think you can stomach it.

autism speaks is actively working for, financing and promoting research into prenatal testing so autistic children can be eradicated before they are even born, like the testing that already exists for down’s syndrome.

“In fact, its symbol, the puzzle piece, was created as a symbol of its purpose; to find the missing pieces of genetic material to establish a connection with autism and genes. This sort of research is problematic because it is part of seeking a cure for autism and can be interpreted as an attempt at eugenics.” LINK

to autism speaks we are “a problem”, “an epidemic”, “a burden to society”, including our parents – especially our parents. we are “a disease”, “a disorder”, something to get rid of.

this is why – in april – every year no autistic person will ever ‘light it up blue’ – because that blue piece of a puzzle is the symbol of those who wish to terminate, eradicate, exterminate – kill us.

i could go on – but instead i am going to leave you with a  final quote and a few links.

“Because demonizing autism dehumanizes my child. Period. Because while shock and awe might raise money, they compromise my child’s safety, they tear away at her dignity, they separate her from the rest of us. “And what of older children and adults?” I asked Mark at the time. At six, I knew that my daughter wouldn’t see that video, but what about those who were old enough to watch it? What about Autistic teens who were so damned vulnerable — to bullying, to depression, to suicide. What about them? Did anyone think of what it would feel like to hear that if you haven’t already, you will destroy your parents’ marriage, bankrupt your family, make it impossible for your parents and siblings to do anything at all without pain and embarrassment? How would it feel to an already-struggling kid to hear that THEY are the cause of desperation, loneliness and fear?”

No Misery: This is Autism, Suzanne Wright

7 Reasons To Not Support Autism Speaks